Colcannon seems to be a traditional Irish recipe for all seasons. I’ve hear it used for Halloween, for St. Patrick’s Day, even for Christmas time. It seems that it just all depends on what you want it’s purpose to be!

However, consistently, Colcannon seems to be a dish that is used to change or improve your fortune, which falls yet again into play with getting those fortunes read or changed during this time when the veil between the dead and the living is thinner. It was not uncommon for people to slip charms into the Colcannon as well, but I think we had enough fun with the barmbrack cake’s charms that I did not include them here as well. 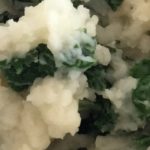 My colcannon was so successful that other than the one instagram story photo I took while cooking, I didn’t get a chance to take a photo of the completed dish! It got completely devoured! @__@

Do you have a Halloween food superstition?