This year, my Halloween focus has been all about getting in touch with my roots. Whether it be culturally, via family traditions, or for my husband’s family and culture. Maybe it’s the coming baby, maybe it’s been that vintage Halloween vibe being thrown around a lot recently or maybe it’s just because it’s been something on my to-do list that I finally decided to jump into it all at once.

Whatever the reason, I decided this year that I would make a traditional Irish Samhain feast for my family and our visiting spirits. Through my research, I managed to find four traditional Samhain recipes that I’ll be sharing over what remains of the Halloween season.

One thing I learned with a lot of Irish Hallowe’en recipes is that they LOVE fortune-telling cuisine. There are many many fortune-telling food recipes for Samhain as one of the popular past-times of the holiday would not only be leaving offerings for the wandering spirits, but also receiving predictions over your own mortality.

Thus enters our first recipe of the season, barm brack (or barmbrack) cake.

This cake is often related to as an Irish fruit cake, but it has tiny trinkets hidden inside, one enough for each member of the family, which will then predict each person’s fate. I decided to deviate from the traditional charms and put a more…murderous spin on it. Since I still had a ziploc baggie full of murder weapons left over from my Clue Carousal party three years ago, this was a great excuse to put the excess to use without spending money on new charms to be more traditional. ^^;; Okay, I was just being cheap, but it works, right?

A simple internet search will pull up the meaning to the traditional charms, but if you’re curious on what our Clue charms predict, I’ve put together the little printout above that you can use too! Perfect for a simple Samhain gathering of friends. Just click on the image to open the file. 😉 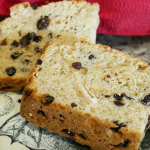 Original Recipe The original recipe called for two cups of dried fruit and a half cup of candied peel. Based off other recipes I had researched, I opted to use currants in place of the mixed fruit and peel (I could not find candied peel for the life of me). As you see in the ingredients, I also only used 1 cup of currants. My family are not big fans of raisins and one cup really looked like enough when I was mixing it all together.

I LOVED this recipe. It was so easy to follow and quick to make. In the recipe book I found it from, it was labeled as “quick bram brack cake”. It was a great fun treat that my family greatly enjoyed. Although the charms are more traditional for families with children, us adults all still greatly enjoyed finding them and finding out what our fortune would be.

Have you ever eaten a fortune-telling treat?